Is it time for a new snow blower? Maybe you’ve been using the same one for a few years and it has served you well, but it’s beginning to cost more in repairs and maintenance just to keep in running. Or worse yet, you’re still clearing all of that snow and ice by hand with a shovel.

We have given the Ariens Sno-Tek 920402 a solid test. We’re looking at overall quality, functionality, and affordability as well as making sure that they’re capable of doing what they are meant to do. While the Sno-Tek does not score a spot on top 5 best snow blower list, it is a solid machine that performs well.

The Ariens Sno-Tek 920402 is a quality snow blower at a high price point. While we do approve of the performance of this model, the lack of a standard headlight makes us scratch our heads. But that did not hinder it from clearing even 25 inches of snow in our test, despite the fact that it only has a 20-inch high opening.

When Ariens says built to last, they mean it. One of the biggest enemies of snow blowers is rust and corrosion caused by the extreme weather. Ariens only uses the highest quality materials in all of their products.

From its durable, metal frame to the heavy-duty, aluminum gear case, this snow blower stands for quality. The control panel is made out of metal as well as the serrated steel augers. And the alloy gears use synthetic oil which gives you both better, smoother performance and a longer lifespan.

Of all of the different things that you are looking for when you are deciding on the best snow blower, the engine is probably the most important. If it doesn’t have the power that you need, it won’t do you much good when you really need it. And the last thing that you want to be doing is following a snow blower with a snow shovel to finish off the job.

You’ll notice as you are looking at different snow blowers that they have either a one or a two-stage engine. If you’re only dealing with light, fluffy snow every now and then, a 1-stage would be fine. But, to deal with the deeper, heavier snow and ice, you need the strength of a 2-stage engine.

This snow blower has the 2-stage performance of Sno-Tek’s own 208cc, overhead valve engine generating 9.5 foot-pounds of torque that can destroy 1667 pounds of snow per minute. Engine power is measured in cubic centimeters. The more cc’s an engine has, the more cylinders it has to produce the power needed. 208cc’s is more than enough muscle to easily tear through over a foot of snow and ice without missing a beat. 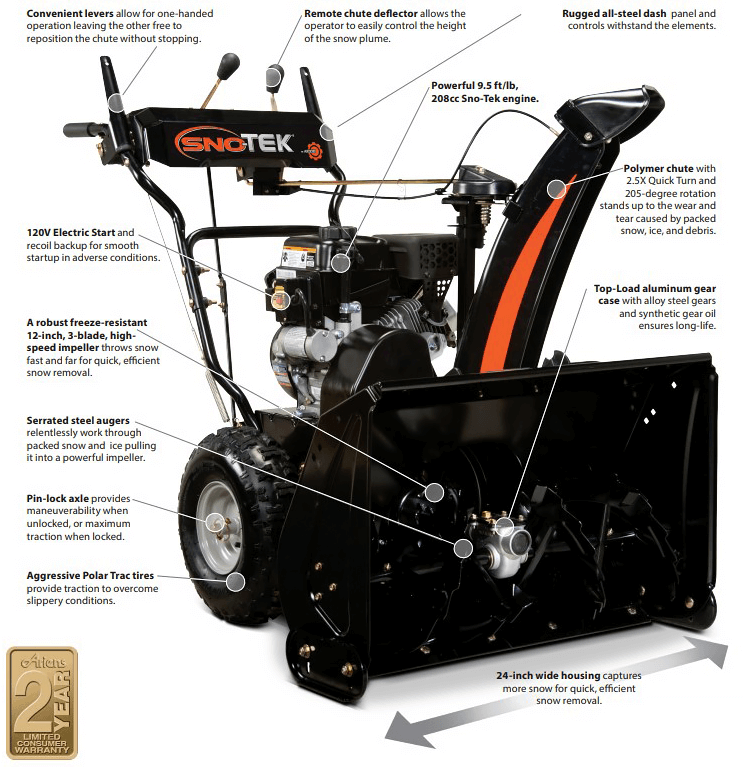 Some snow blowers only have one speed. You fire them up and use your own physical exertion to dictate how fast they’ll go. And some snow blowers will have a couple of different speeds which is a huge convenience.

The transmission in the Sno-Tek 920402 is equipped with the functionality of 6 forward speeds as well as 2 reverse speeds. The thing that’s so great about speed control is that different speeds work best for certain types of snow.

For light, fluffy snow, you would have the snow blower set on a faster, higher speed. And for heavier snow, you’d want to slow the machine down to a slower speed. Having six forward speeds means that you can choose the most effective setting for whatever type of snow that you’re dealing with.

The advantage of having 2 different reverse speeds is that you won’t be struggling to pull the snow thrower out of tight spots. Just switch it into gear, and let the machine do all of the work for you.

The clearance is directly related to how much time it will take you to dig your way out. The wider the intake chute is, the fewer passes you’ll need to make to cover the area that you’re working on.

Ariens has designed this model with a 24-inch wide, top-loaded gear case with an intake height of 20 inches. Inside the gear case, the 11-inch, serrated, steel augers rip through the snow and ice, passing it to the freeze-resistant, 12-inch, 3-blade impeller that drives it through the discharge chute. That’s how it’s able to plow through so much snow and ice.

The 2.5X, quick-turn, heavy-duty, polymer discharge chute will rotate a full 205 degrees, throwing the snow as far as 40 feet away. And the remote chute deflector gives you the functionality of directing how high the snow flies and exactly where it lands.

Here’s a feature that you’ll never want to do without again. Instead of pulling on a cord to start the snowblower, all you have to do is plug it into an electrical outlet and push a button. How’s that for convenience?

It’s especially helpful on those really cold, sub-zero times when batteries tend to fade. Having an electric-start function means that your snow blower will fire up every time. And you still have the option of a pull-start if you prefer.

Everything that you need to operate this snow blower is within hands-reach. You can even operate it one-handed once you have the gears and other functions set, leaving your other hand free to adjust the remote chute deflector control as you guide the machine.

The control panel is equipped with interlocking, over-sized handles, ideal for when you’re wearing gloves. Once the machine is running, just adjust the gears and let it do all of the work.

The skid shoes are on the bottom of the machine for protection. They keep the underside of the blower housing from getting damaged as well as keeping the surface that you are working on safe.

All snow blowers don’t have adjustable shoes where you can change the distance between the housing and the ground. It also makes the snow blower operate more efficiently when it’s not scraping the ground. It’s especially helpful if you have different types of outside surfaces like gravel or other uneven areas.

When the skid shoes are both reversible and adjustable, they’ll last twice as long as single-sided shoes. When the shoes start to show signs of wear on one side, you can just flip them over and use the other side.

The wheels on the snow blower are held in place with axle pins. This model has removable axle pins, giving the machine a little more maneuverability. For most snowfalls, you’ll want to leave it with one wheel locked, giving the transmission full control of the wheels.

But I’m sure that you’re well aware of how much more difficult it is to blow your way through snowfalls and drifts over a foot tall. Removing the axle pins puts you in more control of the wheels and gives you more traction to plow through the deeper snow.

The Sno-Tek 920402 isn’t a small unit. But it’s also not so bulky that it’s hard to manage. A snow blower needs to have a little girth to get through deeper snow and ice.

It measures 26.4 inches wide by 43.4 inches high by 51.9 inches deep, so it’s big enough to get the job done but not so large that you’ll have a problem finding a place to store it. And it weighs about 180 pounds which is on the lighter side for a snow blower that’s as powerful as this one.

The 13-inch Polar Track tires are big enough to give the snow blower the maneuverability that it needs but not so big that they impede its performance. They’re also 4 inches wide, giving you the skid-proof traction that you need to power your way through all of that snow and ice.

The pride that Ariens takes in their workmanship and quality is clearly evident in all of their products. And they stand behind their snow blowers with a full 2-year warranty.

If your winters bring you several inches of snow on a regular basis, with some storms piling up a foot or two, the Ariens Sno-Tek 920402 won’t let you down.

You get the long-lasting endurance of the metal construction and steel components. The 208cc engine has the power that you’ll need to work its way through the deepest snowfalls and starts at the touch of a button. And with forward and reverse speeds, you’ll be able to get the job done more efficiently.

It clears an impressive 24-inch wide path through snow well over a foot tall with ease. The 2-stage action of the serrated-steel auger along with the heavy-duty impeller allows you to rip through the toughest snow and ice, throwing it up to 40 feet away. You also get the benefit of the reversible, adjustable skid shoes under the housing for protection.

The Sno-Tek 920402 is big enough to get the job done, but not so big that it’s difficult to maneuver. The wheels and tires are designed for optimal performance in slippery, wet conditions with over-sized traction control and adjustable pins. And it’s all operated from the weather-resistant master control panel and the wrap-around handle-grips.

Our advice is to click the link below and also read a few of the customer reviews for more input. There are a lot of satisfied customers that have great things to say about it.

Ariens is now one of the leading manufacturers of high-performance, quality-built snow blowers in the world, maintaining the same focus on quality, durability, functionality, and affordability that they’re known for. The Sno-Tek 920402 is on par with the quality we have come to know fro them.

bestvacuumpethairguide.com is a participant in the Amazon Services LLC Associates Program, and we get a commission on purchases made through our links.