If you live in a climate where the winters can deliver snowfalls at rates of a few inches an hour, you already know the value of having a well-build, dependable snow blower. Depending on how severe those snowfalls get in your area, having a snow thrower may not even be a luxury but a necessity.

There’s only so much snow that you can move with a shovel and doing it every day or even several times a day can wear you out pretty quickly. Poulan Pro is known for its wide range of products for us yard work enthusiasts. They also produce a range of snow throwers that beg comparison, because they are all good but have different features and very different price points.

You’ll want to make sure that the model you choose fits your need. That’s why we’ve taken the time to dig in deep and test the top Poulan Pro snow blowers available today.

One thing to consider right away is whether you want a snow blower powered by gas or battery because Poulan only offers the former. Alternatively, check out our list for the best electric battery powered units available.

Powered by a two-stage, 208cc engine, the Poulan Pro PR241 tackles even the toughest snowfalls and terrains. With an intake chute measuring 24 inches across, you’ll get the job done with fewer passes as the 12-inch augers tear through the snow and ice. The 12-inch propellers direct the snow into the 23-inch tall intake, allowing you to tackle the tallest snowdrifts with ease.

Featuring an electric-start that functions in even the coldest weather, you won’t be tugging on a rip-cord to fire it up. The PR241 also has easy-to-access remote controls for the 6-step forward transmission so you can easily adjust the speed. Even the chute rotation and deflector controls are at your fingertips to guide where the snow lands.

The tire tread is 13 inches deep, making it ideal for paved surfaces, gravel, or other uneven areas. And, the bottom of the snow blower is protected with heavy-duty skid plates that both protect it from rust and help it glide over the snow and ice. This model not only scores first in our Poulan list, but also as one of the best snow blowers in general.

This snow blower is the big workhorse of this list. The Poulan Pro PR300 is powered by a two-stage 254cc engine packing 12.5 foot-pounds of torque that will get you through anything that those harsh, northern winters can dish out. It even has an electric start, is self-propelling, and its friction disc transmission provides six forward speeds along with a reverse mode for optimum performance.

The intake chute is designed to conquer several feet of snow and ice. With a width clearance of 30 inches and a height of 23 inches, there’s not much that will get in the PR300’s way. You can even operate this snow blower one-handed with the ergonomically designed, power steering trigger on the handle.

The PR300 utilizes a 2-part process for snow blowing. The powerful, 12-inch ribbon augers rip through the snow and ice, pushing it to the 12-inch impeller blade, where it is forced through the exit chute. And, you can control the direction of the blowing from the deflector with the easy-access, console controls.

Here’s another Poulan Pro snow thrower that hasn’t disappointed us. It also has a convenient electric-start, two-stage, 254cc powered engine loaded with 12.5 foot-pounds of torque, designed to blast through the deepest snowfall. The PR271 actually has many of the same design features of the more expensive PR300, but at a lower price tag.

You still get the advantage of the self-propelling, friction disc transmission with six forward speeds and a reverse function. The PR 271 also has a power steering trigger on the easy-grip handle along with the easy-access chute and deflector controls on the console. And, it still uses a 2-part clearing process, with a 12-inch ribbon auger breaking through the ice and snow and a 12-inch impeller blade blasting it towards the exit chute.

The only real difference between the PR300 and the PR271, aside from the cost, is the width clearance. It still has an impressive 27-inch width with a 23-inch height, but it is a little smaller than the PR300. 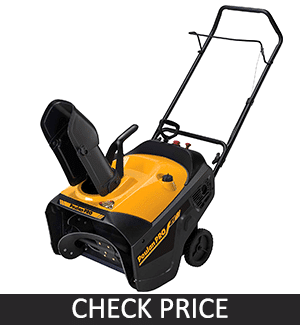 If you have a small driveway, only have to deal with sidewalks and pathways, or just have to deal with occasional snowfall, the PRO100 might be perfect for you. It has a powerful one-stage, 136cc engine that packs enough punch to effectively blow through most snowfalls. It’s also smaller than some other snow blowers, making it both easier to maneuver and store when it’s not in use.

With a 21-inch clearance width, and an intake height measuring 13 inches, the PRO100 can still handle over a foot of snow. It also utilizes an 8-inch auger to break up the snow and ice and has an 8-inch propeller to push the snow through the exit chute.

The PRO100 also comes with a convenient electric-starter so it will operate in even the coldest weather. There is also a more expensive version of this model that comes with a manual starter instead. All of the controls are large enough for easy access while wearing gloves.

The PRO PR240 made our list not only because it has many of the more expensive features of the costlier models while maintaining a fairly moderate price point.

It’s two-speed, 179cc powered engine roars with 8.25 foot-pounds of torque, giving it plenty of snow blowing power. The friction disc transmission supplies six forward speeds and has the added convenience of a reverse speed for when you need to get in and out of those tight spots.

With an intake clearance of 24 inches wide by 23 inches tall, the PR240 can tackle a few feet of snow and drifts. It uses Poulan’s most effective 2-step clearing process by tearing through the snow and ice with a 12-inch ribbon auger and blowing it through the exit chute with its impeller blade.

Choosing a clear winner was a tough decision, especially when we’re considering products made by a company with a reputation for manufacturing only high-quality products designed for optimum performance. After extensive testing, taking the overall customer review base into account, and weighing the different features of each model, one snow blower just stood out as the clear winner above the rest.

With the Proulan PR241, you get the features that you really need along with a few luxuries that are always nice to have. It is a snow thrower that will be able to tackle the deepest snowstorms. The PR241 hit all the marks that we were looking for in the best Poulan Pro snow blower.

Check it out for yourself and you’ll see why it’s our clear choice. Click this link take a good look at everything that this snow thrower has to offer. Make sure to take a look at the reviews from all of the satisfied customers who already use the PR241. It just might be the perfect model for you.

Poulan began manufacturing quality power tools in 1946 when a veteran lumberjack named Claude Poulan realized the need for durable, affordable chainsaws in the logging industry. At the time, two-man chainsaws were the most effective tool, and Poulan was quickly producing the best on the market.

By the early 1950s, Poulan was paving the path with top-quality chainsaws for loggers and was in the process of perfecting their first line of one-man chainsaws. The Poulan brand was rapidly becoming known for providing the most powerful, durable, and quickest chainsaws in the logging industry.

As the company grew, Poulan realized the need for high-quality chainsaws in the private sector and began manufacturing products more suitable for the general public. Later, Poulan would begin making lawn tools and weed trimmers, eventually producing lawnmowers, all with the same high-quality and cutting-edge innovation that they were known for.

Over the years, they’ve earned a reputation for providing high-quality, innovative, and affordable power tools. Today, Poulan is a leader in the snow blower industry as they continue to deliver their trusted, top-of-the-line products.

Things to Consider for Choosing a Show Blower

We like Poulan’s snow blowers because they are quality-made, performance-driven, and reasonably priced. Choosing the right one for you depends on what you need out of a snow blower. Here are some of the most important features that we look at on snow throwers in general.

snowblowerreviews.com is a participant in the Amazon Services LLC Associates Program, and we get a commission on purchases made through our links.